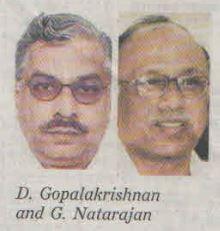 They are the only two to be selected from State for global meet in Spain
When D. Gopalakrishnan and G. Natarajan, in their late 60s, pack their bags and head off to Spain in a few days, it will have nothing to do with the travel bug materialising awfully late. Rather, the senior citizens will be in Barcelona for a more solemn purpose – to engage in global deliberations on the welfare of pensioners and retirees.
Mr. Gopalakrishnan and Mr. Natarajan, national vice president and general secretary respectively of the All India BSNL Pensioners’ Welfare Association, are the only two from Tamil Nadu and a select few from the country to be invited as delegates to the first ever International Congress of Trade Unions of Pensioners and Retirees hosted on February 5 and 6 under the auspices of the World Federation of Trade Unions.
The two of them, who lead an organisation that fights for the rights and welfare of an estimated 40,000 BSNL pensioners, including 7,500 in the Tamil Nadu and Chennai telecom circles, had applied for participation in the event online.
While clearing the participation of both delegates, the event organisers in Barcelona agreed to sponsor the flight and accommodation expenses of one participant; later, the BSNL Pensioners’ Association decided to foot the bill of the second delegate as well.
“We understand that one of the important issues that will be discussed at the summit will be the consequences of various countries cutting down on expenditure of retired persons through pension reforms,” said Mr. Gopalakrishnan.
The two delegates have been allocated 10 minutes each to put a perspective on pension schemes and issues in disbursement of welfare benefits in India where the retirement age has been fixed at 60 years in Central Government and 58 years in State government departments.
As they prepare for their Spanish sojourn, their worries have nothing to do with not knowing a single word of Espanol or having to cope with 15 degree C climes; but they are a tad concerned about how they would source vegetarian fare during their stay. “A quick web search for vegetarian restaurants threw up the name of Hotel Govinda…now we need to find out whether it is anywhere near our venue,” says Mr. Gopalakrishnan.
M. DINESH VARMA
THE HINDU - CHENNAI, January 21, 2014
http://www.thehindu.com/news/national/tamil-nadu/pensioners-invited-to-o...